Please also take a look at this site https://a350bypass.com/

Wiltshire Council cabinet have at last released the results of the July/August consultation. Cabinet have decided (as expected) to move forward with the 10c option. The consultation results however revealed some strong opposition to the route proposed running close to Redstocks and around the back of the Bowerhill residential estate. The report  indicates that there could be room for alternatives to be considered as the process moves on and two more non-statutory are being proposed.

Or to take an extract from the report

" From the consultation it is clear that there are opposing views about the need for a bypass. However, it does appear that the emerging route, or a variation of it, could provide a suitable route for the scheme should it proceed to the next stage."

Map below is a big download so be patient!

below is taken from the June 2021 consultation papers 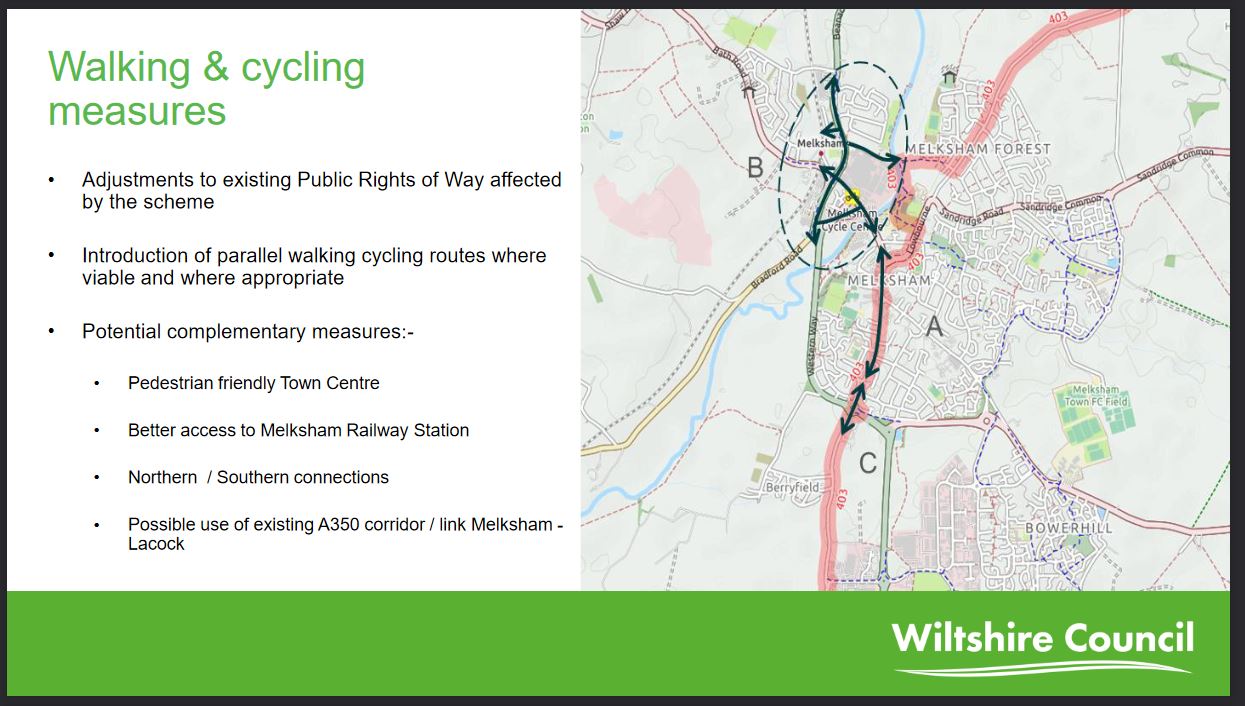 Government, a bold vision for cycling and walking. PDF

Cycling in the Devizes Area. PDF

National and local studies and surveys have been carried out trying to assess the reasons people do or do not use bicycles as a form of transport, either for short or long journeys, work or leisure. The above documents are an overview of current thought and desired future developments. They are typical of this sort of thing, with lots of charts, figures and waffle (sorry, talk!) about the whys and wherefores. During the first lockdown on 2020 the weather was good through all of it and the endless spare time a novelty, no wonder cycling took off in a big way, if only to be able to get out and about legitimately. Halfords were selling bikes as quick as they could import them.

On prompting (and some funding) from Government to enact social distancing requirements we saw the rise of many 'segregation' schemes, some Ok but quite a few not very well thought out or hastily thrown together. I could name a couple that Wiltshire Council put together which are little used because they were not needed. Of the widely publicised  '£2 billion package to create new era for cycling and walking'  when broken down into all the English counties (Scotland, Wales and NI have to make their own arrangements), Wiltshire were allocated a first tranche of £227,000 with a further £681,000 available only for approved schemes.  Individual authority allocations from Active Travel fund. London Boroughs (including TFL) was allocated £5 million followed by another £20 million!! Bit of a discrepancy here don't you think?

Anyhow, this was all back May 2020 before the Government changed the rules mid-way through the game towards the end of July 2020 with LTN1/20

Government Guidance LTN 1/20 clearly states that only fully segregated (pedestrians from bikes from cars) and connected (direct) cycleways will in future be funded by government grants. This obviously generates a particular problem for all urban councils as most of our roads have evolved over time and never intended for this sort of segregation. That is something for individual authorities to sort out but in the meantime what happens to our existing shared footpaths/cycleways? In general they are there because it was thought a good thing at the time and probably used frequently, but have been notoriously badly maintained over the years. As LTN 1/20 requires that existing cycleways, shared or not, should be brought up to a newer and more acceptable standard and subsequently kept there; where will the money come from? Out of the the councils funding allocation? Not much going to be left over for new routes.

So, back to where I started with surveys and studies. The general conclusion of all except London was that most cycling is done for leisure in the 30 to 50 age group, with very little for shorter journeys like shopping and going to work. Not surprising result to anyone I should have thought. Now, Boris seems a keen(ish) cyclist and often quotes the large hike in cycling in the capital as proof that it can be done elsewhere.

Money is available for cycle/walking improvements but the criteria required by government to be granted this money is quite high and is going to be very difficult to achieve for many Local Authorities. A recent consultation by WC on cycling improvements was constructive in that a couple of the temporary cycleways introduced during 2020 were 'voted out' by the responses, whilst others are to be made permanent with some suggestions being moved forward to a further consultation in the near future.

In the light of the massive national debt incurred throughout the pandemic I suspect the Government money will dwindle and the onus put on Local Authorities. I cannot see cycling and walking facilities changing significantly in rural areas such as ours simply because adapting our roads, in and out of towns /villages just cannot be done in a way to have any real impact. Even something such as where to put a few bike racks seems to provide endless passing of the buck!