Abbreviations often used in this context

Well, we are entering a new phase of the Melksham Bypass saga,

so I guess a new front page is in order

Route 10C has been selected as the only option going forward, with some possible variations at the northern end

A second consultation exercise featuring route 10C is now over and we await the result from WC.

Here is the extensive bumph that went along with it: July consultation.pdf

This Cabinet decision marks the next step towards a bypass for Melksham that, if approved by the Department for Transport (DfT), would create more reliable journeys and less congestion on the A350, improve safety and reduce emissions, and support economic growth in the area.

It's really important that people get involved in the second consultation, which we'll launch at Melksham Area Board on Wednesday 23 June, as it will help to shape the Outline Business Case that we'll present to DfT.

DfT will then review the Outline Business Case against its criteria and ensure the views of the local community have been properly considered, before deciding whether to proceed with the scheme.

The first consultation was held predominantly online due to COVID restrictions, but as long as the Government's roadmap out of lockdown continues to progress, we hope to hold both in-person and online events for this consultation, so that as many people as possible have the opportunity to have their say. We'll also put displays in Melksham Library so that people can come and find out more about the proposals.

We'll be releasing more details soon on how people can have their say on the proposals ahead of the consultation launch at Melksham Area Board. (note: haven't seen anything about this anywhere else) 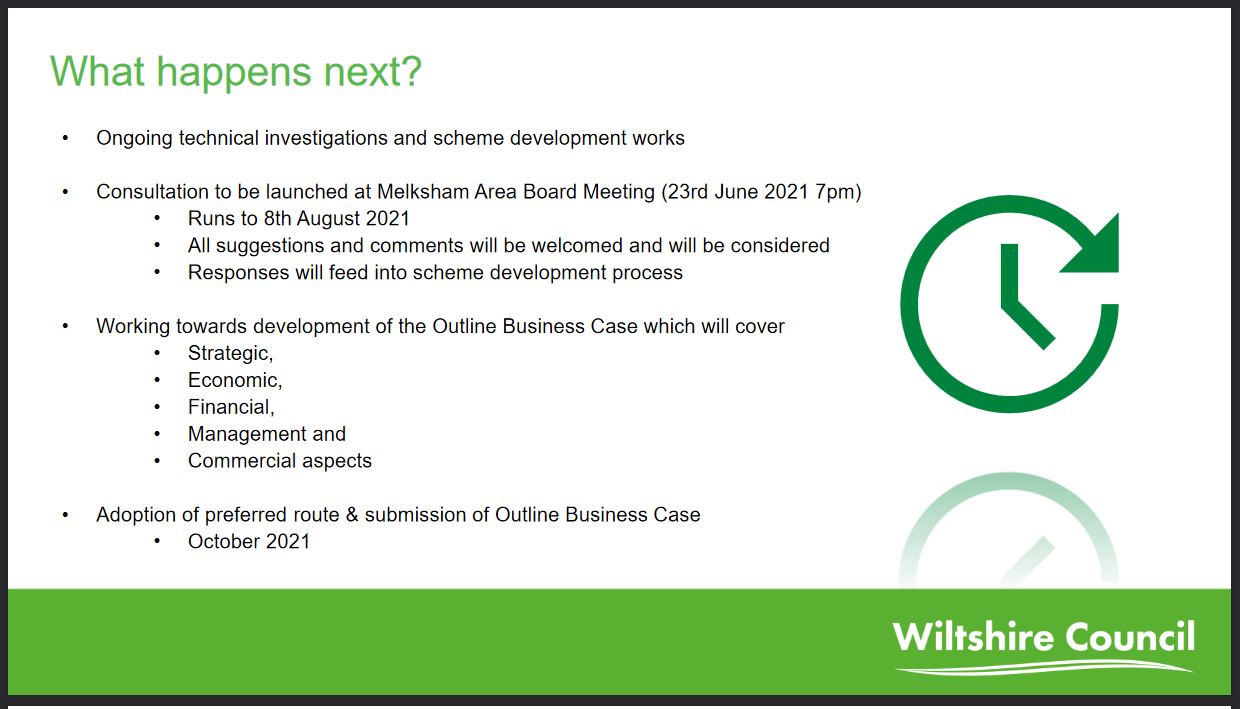 Bringing us up to date and (as was expected and widely predicted) Wiltshire Council Cabinet have accepted their own report in full and intend to proceed to a further public consultation. (see above) This next consultation will only have the 10c option (again, entirely predictable) with some possible variations included. All the other previous options are now firmly discounted!

The November consultation produced a wide range of diverse opinions in the responses to all the options. We are not going to get that choice this time around, just 10C with some possible northern variations. What was interesting in the first consultation were the numbers against any bypass but encouraging improvement of the existing road come high up the list, but of those who did favour a bypass, 10c made it above the others, not by a lot but it did.

Anyway, have a read yourselves and make your own mind up.

This bypass isn't about local needs but part of a Government led nationwide plan to upgrade our major road system, it's not for us but for those who pass through the county. This scenario is being repeated all over the county and the country

It's pretty obvious that in the great scheme of things, barring a withdrawal of government funding, there WILL be a Melksham A350 bypass whether we locals want it or not! I feel there is little mileage in trying to stop this gravy train, the best we can do is attempt to mitigate the environmental destruction and effects on peoples day to day life it will inevitably have.

This 10c route is the one that crosses the A365 near The Oak school and passes around the canal side of Bowerhill housing estate, between Brabazon Way and Giles Wood and joins the existing Portal Way via a new roundabout somewhere between Hampton Business Park and where the K&A crosses the existing A350.

By the Councils own figures it is estimated that daily traffic volumes are often above 35,000 vehicles per day, and heavy goods vehicles account for around 8% of all vehicles along the current Melksham section of the A350. Being generous and allowing say 10,000 cars that will continue to use the existing route for local traffic, that gives us 25,000 a day, that relates to 1,041 an hour evenly spread over the 24hr period. That in turn gives us 17.36 vehicle movements per minute.

Now obviously traffic flow is not evenly spread, common sense (not often used in Government!) will tell us more cars move around during the day (say 8am to 8pm hours) than at night (8pm to 8am). So making allowances for this lets assume 2/3rds -1/3 split. Inaccurate I know but just for calculations sake.

We now see a considerable increase in traffic flow per minute during the day, approximately (and erring on the lower side ) 1,400 an hour or 23 a minute. (Took me a while to work this out so please let me know if its wildly wrong!!)

Going to be hell for Bowerhill residents!!

The first section includes the comments:

Seems to me the decision was already made to use 10c and the consultation a bit of a public relations exercise, as no doubt will be the second.

Sections 31 to 48 summaries the responses to the November consultation

Section 56 to 86 deals with the first and second sifting of options into viability and follows the same pattern, with eventually 10c emerging as the 'preferred option', much the same as in all the original November documents.

The indications are that the currently identified funding resources will be adequate to progress the scheme to the OBC stage. It is anticipated that the successful acceptance of the OBC by DfT would result in an award of further funding to progress the scheme to Full Business Case (FBC), which would include the planning and statutory processes and the contract procurement.

The collated responses to the November consultation is available to read online here: https://www.wiltshire.gov.uk/highways-a350-melksham-bypass

I have also downloaded the relevant documents here:A350_Melksham_Bypass_Public_consultation_report_FINAL.pdf